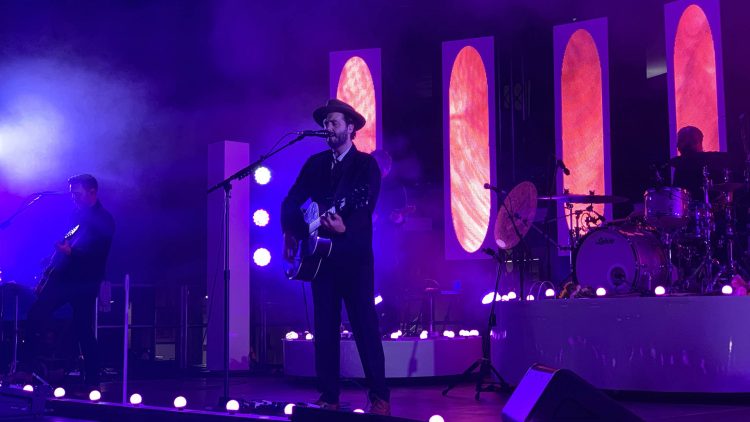 Posted by Reservations at Sunset Lodging on May 26, 2021 | Featured | No Comments

Bend summer concerts are back! Summer is fast approaching, and we are all itching to get back into the concert venue. Les Schwab Amphitheater has spent this past year remodeling its stage in order to attract a wider array of acts to our neck of the woods. By the look of this year’s Bend summer concert lineup, that plan is working. Spend your day soaking up the beautiful weather in Sunriver, and then take a short 20-minute drive to Bend to spend the evening grooving along to your favorite tunes. This is your vacation. Let’s make some memories!

After the challenging year we’ve just had, we think you deserve to relax with the laid-back vibes of Rebelution. As veterans of the Les Schwab Amphitheater scene, you can rest assured that this band is ready to bring a crowd-pleasing blend of reggae, rock, and dub. Grab a beer and section of lawn to chill out on, and let the good mood wash over you.

This co-headlining show is bringing the alternative bluegrass of Trampled by Turtles and the folk-rock of Mt. Joy in order to create one explosively energetic experience. Trampled by Turtles has been active since 2003 and is well-known for their unique twist on the bluegrass sound. Mt. Joy, founded in 2016, will be here to save us after this challenging year. To quote their hit song “Silver Lining,” they are coming to “let the music play you through the pain.”

Dierks Bentley is coming to Les Schwab Amphitheater to spread joy to country fans this August. Nothing says summer better than an upbeat country concert under the sunshine and alongside the beautiful Deschutes River. Put on those cowboy boots, grab a beer, and let’s get ready to party!

A leader in Denver’s tight-knot folk scene, Nathaniel Rateliff has been a dubbed a “local folk pop here” by The New York Times. Joining forces with The Night Sweats, this show is sure to be a raucous good time. You’ll recognize his gritty voice from hits like “Son of a Bitch,” “You Worry Me” and “I Need Never Get Old.”

Are you ready to rock ‘n roll? Renowned rock band Primus will be covering the classic Rush album “A Farewell to Kings” this summer, in addition to playing from their own catalog for the crowd. Primus has been on the music scene since 1984, and they are known for their unique blend of folk metal and experimental rock.

Atmosphere is an Americana hip-hop duo from Minneapolis, Minnesota. The duo has released eleven studio albums, continuing to grow in popularity with their unique blend of hip-hop and rap. Co-headling the show is Cypress Hill, the first hip-hop group to have multi-platnium and platinum albums, having sold over 20 million albums worldwide.

Fans of modern country love Old Dominion, a quintet from Nashville, Tennessee. The Country band blasted onto the scene in 2007, winning sought after titles like ACM and CMA Group of the Year, twice! Popular singles include “Written in the Sand” and “Hotel Key,” which earned Platinum and Gold certifications.

Sway along to the feel-good, summery beats of Dirty Heads and Sublime with Rome. Both bands fall in with the reggae, hip-hop, rock scene with a beachy vibe. Sublime with Rome former when Rome Ramirez joined former Sublime member Eric Wilson and Carloe Verdugo (former Tribal Seeds drummer) to create a familiar, but signature sound.

Modest Mouse has been writing and creating music since their formation in 1992 A quintessential Pacific Northwest indie rock band, the band has seen multiple lineups, but is anchored by leading man Isaac Brock. Modest Mouse returns with their first new album since 2015, The Golden Casket.

Brandi fans have been waiting patiently for her to reschedule her 2020 show at the Les Schwab Amphitheater. The Grammy Award-winning Americana singer/songwriter did us one better with not just one night of her popular folk-rock jams, but two! Carlile is an Amphitheater favorite and we can’t wait to hear the new music she and the twins have been working on since we last saw her on the Bend stage.

Death Cab For Cutie is no stranger to the Les Schwab Amphitheater stage. The indie rockers from Seattle have graced our hometown stage several times over the years and never disappoint. Expect to hear some of their biggest hits including “Soul Meets Body,” “I Will Follow You Into the Dark,” and hopefully songs from their most recent EP, The Georgia E.P.

DMB lovers rejoice! As a fan favorite, The Dave Matthews Band is returning to the Les Schwab Amphitheater this September to share guitar riffs, raspy sing-alongs, and a deep 90s musical nostalgia. With Dave’s prolific catalog, you can be sure the setlist will be a unique and memorable experience. Be sure to get your ticket before they sell out!

NEEDTOBREATHE got their start as a brother band out of South Carolina, and over the past 13 years, they’ve created a loyal fanbase of alternative rock and Southern rock enthusiasts. They have toured with the likes of Tim McGraw and Taylor Swift and are known for their expansive sound and thoughtful lyrics.

With special guests: Switchfoot and The New Respects

Foreigner has long been hailed as one of the most popular rock acts in the world, with 10 multi-platinum albums and 16 Top 30 hits. Join Foreigner for a night of hits, including “Hot Blooded,” “Cold as Ice” and “I Want to Know What Love Is.”

Lord Huron wowed Bend crowds in 2019 at the Athletic Club, and now they are back and booked at the larger venue of Les Schwab Amphitheater. The indie rock band has gained quite a following in recent years and is best known for their hit song “The Night We Met.” The band will be touring under their highly anticipated forthcoming album “Long Lost.”

After being rescheduled from his 2020 concert dates, Luke Bryan will be here with his highly anticipated two-night run. Known for his sing-along tunes as well as his catalog of twenty-three #1 country chart-toppers, Bryan is likely to bring the crowd together for a memorable country music experience.

The recognizable sound of My Morning Jacket takes inspiration from rock and country, which also delves into psychedelia and experimental sounds from their Kentucky origins. Lead singer Jim James and the band have been hailed as heroes of alt-country and praised for their eclectic sound.

Some bands are automatically synonymous with a genre or style of music. 311’s blend of rock, reggae, hip-hop and funk fusion with some elements of metal fall into that distinction. The band formed in 1988 and has since been a fixture in the alternative rock scene. A few favorite songs include “Amber” and their cover of The Cure’s “Love Song.”

As of June 7, this is the lineup for the upcoming 2021 Bend summer concert season at Les Schwab Amphitheater. We anticipate more announcements as the weeks go by, and we will update you with any changes. Happy listening, and we will see you soon during your vacation in Sunriver!